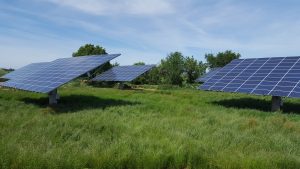 The sale marks what is believed to be the first commercial adoption of dual-axis solar technology in Israel. The deal also precedes a government pilot project for use of the unique tracker in agriculture. Both will involve dual use of the land.

STOCKTON, CA and TEL AVIV – March 25, 2022: Mechatron Solar has secured its first sale of its patented dual-axis tracker technology to Israel with a 200kW system that will serve as a solar carport on the campus of an academic institution located in central Israel. The sale is believed to be the first instance of dual-axis tracker technology adoption in the country, according to Yorum Gordon, the CEO of Gyn Energy, Mechatron’s exclusive distributor in the country.

In addition to this first sale, Mechatron has designed a dual-purpose tracker for use in agriculture for the Ministry of Agriculture and Rural Development, with the first pilot project expected to be installed soon, Gordon notes. The modified design of Mechatron’s unique, patented tracker involves added space between panel columns for the penetration of direct light to crops on the ground.

“The extra energy yield from the dual-axis technology is important here because the country is committed to derive 30% of its energy from renewable sources by 2030, while the very small footprint of the single-mast system permits dual-use applications like carports and agriculture,” Gordon says.

Solar energy is particularly attractive in Israel because of the country’s sunny location on the 30th parallel, capturing an annual incident solar irradiance of about 2,000 kWh/square meter, compared to a global average of about half that intensity. Land use in Israel – which is about the size of New Jersey — is hotly debated, so the planned dual use of solar will be key to the expansion of the industry. Strategically, solar also has taken on a higher priority as a source of energy development since Israel lacks oil production.

“The extra yield of the Mechatron tracker – about 20% higher than a single-axis tracker and about 40% higher than a fixed ground mount – is also important because more projects will pencil out here,” Gordon notes. With the use of bifacial solar panels in Israel, like those now installed on Mechatron Solar trackers in North America, the tracker is expected add another 15% or more in the yield comparison.

“I am extremely pleased that both the commercial sector and the government in Israel have recognized the benefits of our advanced solar tracking design, along with our industry-leading 99.9% availability rate,” says Michael Fakukakis, CEO of Mechatron. “We look forward to helping build out the highly important solar industry there.”

Mechatron’s highly-reliable M18KD trackers, which have been field proven in locations ranging from Nova Scotia, Canada to Southern California, can operate in sub-zero and high-heat desert conditions. The tracker is increasingly being adopted for geographically constrained sites like carports and wineries, to steep slopes and challenged terrain.

Over the last 12 years Mechatron’s next-generation gearless ball-bearing tracker design has demonstrated unparalleled operational stability and resilience across a global fleet of 90 MW. This performance represents the highest uptime in the solar tracking industry as well as the lowest maintenance cost over the duration of the project lifespan. As a result, the Return on Investment for a Mechatron tracker is typically less than four years.

Mechatron will manufacture approximately eight of its flagship M18KD trackers in Stockton for the commercial project. Mechatron sources its components globally – including fabrication in Europe and Asia — with overlapping country vendors, to assure timely project execution.

Mechatron Solar is a world leader in solar technology and solutions. We strive to deliver the best performance, the best reliability and the best ROI in the solar industry